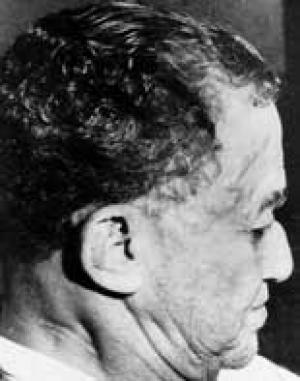 Nhozim was born in 1904 in Bacuripanã, a village near Cururupu, Maranhão State, and was registered under the name of Antonio Bruno Pinto Nogueira. Right from childhood he would make little boats, trees and also miniature animals and bridges to decorate Nativity scenes. He contracted syphilis in 1916, when he was 12 years old, which progressively deformed his body, but did not prevent him from continuing his work. He developed a sophisticated style with attention to detail, which reached the peak in his bumba-meu-boi theme [traditional ox festival in North and Northeast Brazil]. Pursuing the idea of movement, he created figures in light wood (Mauriti palm), decorating them with tissue paper, glass beads and sequins, as mobiles hanging from a metal ring, turning in the breeze. He died in 1974 victim of the disease contracted when he was a teenager losing his legs and sight.