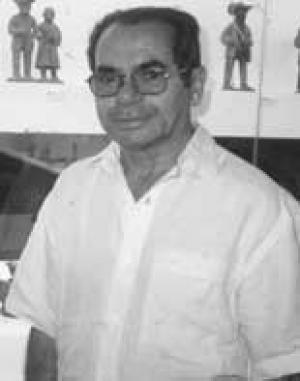 Manuel Eudocio Rodrigues was born in 1931 in the village of Alto do Moura, close to Caruaru, Pernambuco State. He began modelling clay just like the other children brought up in pottery environments in Brazil: by watching their close relatives and making tiny toy animals. In 1949 he met Master Vitalino when the latter moved to Alto do Moura, and became his disciple. Like Zé Caboclo, his brother-in-law, he would first produce sculptures in natural clay. Influenced by the market, he began painting some of the pieces with strong brightly-coloured paint. He loved the “art of the figurine” and created a large repertoire: bandits, wedding couples on horse-back, and the local traditional festivities of maracatu and bumba-meu-boi. He is considered one of the best potters in the place where he was born and still lives today. He is married and five of his nine children have followed him into the trade.