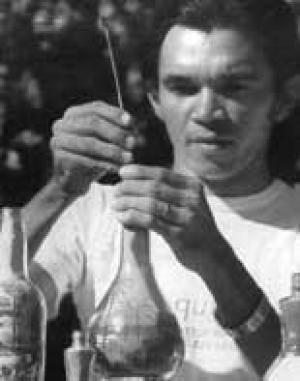 Edgar Andrade de Freitas was born in 1950, in Praia de Majorlandia, municipality of Aracati, Ceará State. Even in his early childhood he loved to sculpt with the multi-coloured sand, abundant in his region. He began his apprenticeship as a disciple of Dona Joana Carneiro, pioneer in the aesthetic renewal of the work from this centuries-old technique. His “bottles of sand” soon became famous at home and abroad, standing out from the others for his masterly technique, the wide range of colours he uses and his realistic figures. After he married and had children, Edgar settled in Fortaleza because of his work.