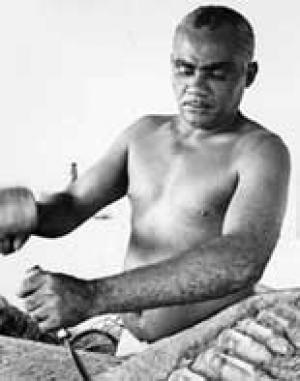 Louco is the nickname by which sculptor Boaventura da Silva Filho became known. He was born in 1932 in Cachoeira, a town in the Reconcavo Baiano, and set up a kind of school where he would convey his knowledge to family members. Inspired by the Afro-Brazilian religious theme, Louco produced a vast fantasy-style repertoire, mostly of saints, angels and figures of Christ. The natural form of the wood in his sculptures is fundamental. Considering it a challenge, he would produce unforgettable figures. His relatives who followed him and, in fact, also adopted irreverent nicknames, are also well-known artists: his brother Maluco, nephews Maluco Filho, Doidão and Bolão, and his own son, Celestino, who signs his work "Louco Filho". Louco died in 1991.